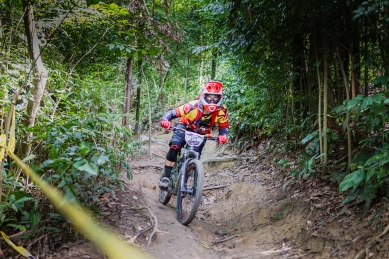 The close-knit nature of mountain biking communities; means that often, fans get to race alongside their sporting idols. Whilst this may be true in countries producing home-grown World Cup rider; for mountain biking fans in Malaysia riding with pros is practically a world away.

So when news got out that Polygon UR’s World Cup downhillers; siblings Mick and Tracey Hannah were coming to Malaysia, the local community was abuzz with excitement.

Coming off a successful and eventful World Cup season, the Hannah siblings were here in Malaysia performing their off-season duties as ambassadors for Polygon bikes. They had a few busy days ahead of them lined up; attending meet and greets, filming duties on local trails and ride clinics across the Klang Valley. From the flowy trails of Putrajaya Challenge Park (PCP), BMX race track in Sendayan to the tropical trails of Bukit Kiara.

What I was personally most excited about; was their participation in KrankyKiara, one of South East Asia’s largest grassroots community run enduro race. Racing with pros is a reality again for the Kuala Lumpur mountain bike scene.

The Meet and Greet

I was fortunate to be invited to a meet and greet dinner with Mick and Tracy; along with other members of the local mountain biking community, organized by Polygon Malaysia. Armed with a bunch of questions and nervous energy, here is some insight from conversations with the Hannahs themselves from that evening.

Like a proper Malaysian, my first question was of course about food. I regret to report; that at the time of questioning neither Mick nor Tracey had had the chance to sample any of our local cuisines. It was something which I pleaded for them to remedy as soon as possible!

You could justifiably think of Mick’s 2017 season as his comeback year, if you ignore the fact that he never really went away. I asked about his ridiculously close 2nd place finish at the recent World Championships in Cairns. It was such a significant race for the Hannah siblings for multiple reasons; the unveiling of Polygon’s much talked about new DH9 and racing in front of a home crowd.

If there was any disappointment or discouragement by the 2nd placed position, Mick did not show it whatsoever. If anything, it was further fuel for him to a more successful 2018. Proof that at 34, he still had what it takes to compete against the world’s best.

Tracey on the other hand, was the woman to beat going into the World Championships. With a World Cup win and multiple podiums leading up to the race, she set a pace that was unmatched until disaster struck. A run so blisteringly fast; that even with a crash that appeared to knock her out briefly, she finished in 3rd place.

It took practically all my willpower to not ask the cliché joke question of the gravity mountain biking scene, “Are you going full enduro?”.

Being committed downhillers, Mick and Tracey both confirmed that they were not about to go “full enduro” any time soon. However, they were far from inexperienced with this mountain biking discipline. They have both raced the discipline at the highest level of the sport. I am informed that they have both raced the Enduro World Series (EWS) round in Tweedlove, Scotland in 2014 and Mick racing again in the EWS at Whistler in 2016.

Getting Kranky with the Locals

PCP got the big thumbs up for having excellent facilities; with trails that are well built, well designed and a lot of fun.

Their opinions on Bukit Kiara were that it was a fun, challenging and surprisingly extensive trail network. They were amazed at how such a network could exist on relatively small hill, smack in the middle of the urban environment. The tropical setting and trail features reminded of their home trails in Cairns, although with a little less steepness and a little more climbing involved.

A bonus for them, was the presence of monkeys, not a creature the Hannahs see a lot of on the race circuit or at their respective home bases. Tracey in particular expresses a fondness for our primate friends, as she shares her camera roll of multiple monkey shots.

They agreed that the race course for the upcoming enduro race would be a tough one for all. I was glad to know that the pros shared my pain as a race entrant. Whatever hopes local riders had for an advantage over the pros with regards to the local climate, were quickly dashed. They were enjoying the weather which reminded them a lot of Cairns; hot and humid.

The Pro Life – Not for the Faint Hearted

Considering the physical demands and high stakes of professional downhill racing, both Mick and Tracey have unsurprisingly had their fair share of injuries. Tracey’s most recent major injury was a broken femur and collar bone after a crash at a World Cup in Val D’isere, France back in 2012. With this mind, I ask them both, separately, on what was the hardest thing about being a professional downhill racer.

For Tracey, it was the rigours of travelling and being away from home. Mick’s response was more focused on strains of life on the road during the race season. Being able to recover in between World Cup rounds whilst coping with a gruelling travelling schedule was his biggest challenge.

Both attribute a high level of mental toughness and specific focus, to thrive on the pro circuit. Coming from a family of talented mountain bikers; unlike Mick and Tracy, the remaining Hannah siblings have chosen a life away from mountain bike racing.

The Off Season – Work and Play

Contrary to what the term off-season implies, it is the period where the pros work the hardest. Strength training was their biggest focus, to cope with the rigours of gravity racing. Throw in some road riding for fitness. I learned that while they focused on eating healthily, there we no strict diets involved. I also learn mental coaching forms an important part of their training and preparation. A mental coach was recommended to them; initially for Tracey, following her major crash in 2012. They have worked together ever since.

Proving that there can be a lot of play amongst all the hard work, I ask about what they enjoyed most on their down time. Both enjoy the outdoors greatly. Mick is a keen spearfisherman. He was happy to confirm that he yet to have any up-close encounters with crocodiles.

Tracey misses her dog dearly while she is away and makes the most of her off season time to be home. Having a partner that does not cycle, allows her to take the occasional break from the world of bikes.

Speaking to both Mick and Tracey, it’s very clear that they are big on family and value the time they have with each other. Family members occupy their list of favourite people to spend with the most, especially in the off-season. Whilst Mick was born in far-away Victoria and is currently based in Colorado; both siblings grew up in tropical Cairns and consider it home. Tracey lives only a ten- minute drive away from her parents and jokes about how often she sees them.

Considering all the beautiful places that they’ve had an opportunity to travel to as professional mountain bikers; the Hannahs make it clear that Cairns is the place they would both rather be for the long run.

I ask Mick on his thoughts about the very limited geographical spread of World Cup races; Europe- centric, a couple of rounds in North America and the odd visit Down Under. He could not be more enthusiastic for more World Cup competitions outside of the aforementioned regions. He cites one of his most memorable World Cup experiences; a round held in Japan way back in 2001, as a massive success. He recalls a massive, enthusiastic crowd in attendance and healthy commercial support for the event. He believes that there are World Cup standard downhill trails throughout the world and would welcome a true, geographically spread World Cup circuit.

So, riders everywhere, don’t give up on that dream of a World Cup race close to home.

Thank you to Mick and Tracey for answering my questions with enthusiasm and good humour. Thank you to Polygon Malaysia for the opportunity to meet our sporting idols.

P/S Tracey, I hope you seriously consider my request for more point of view ride commentary videos from you. I assure you, we need more of them!

P/S/S I regret not having the chance to ask them later in the week, if they both ever got a chance to have some roti canai or if Tracey ever got to have a flat white at one of local cafes.